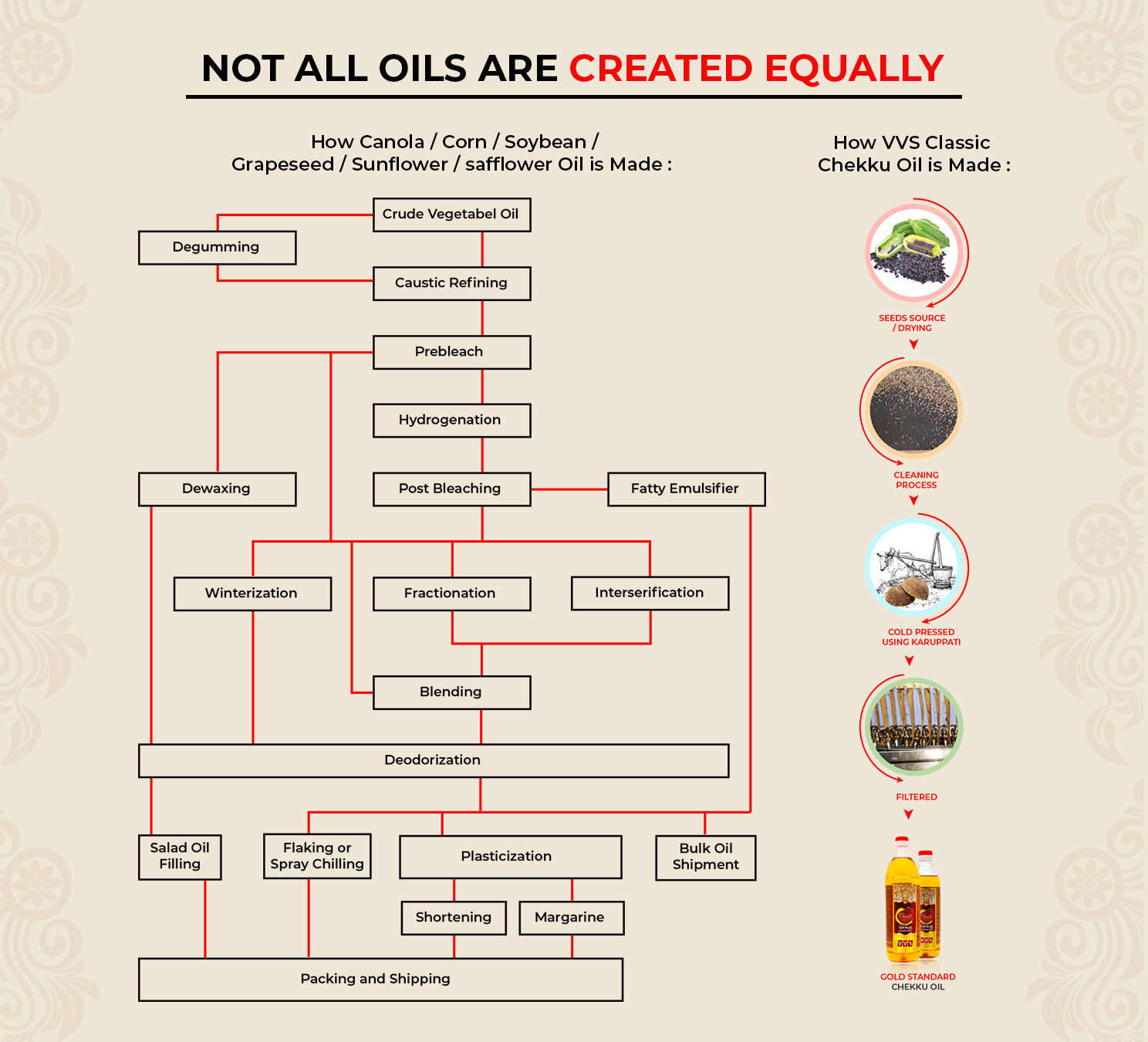 Chekku Oil extraction process of VVS involve crushing of the seeds without using expellers. Cold pressed sesame oil is extracted from dry sesame seeds by cold-pressing method. This is a process of extracting oil from sesame oil seeds at room temperature in a traditional way. That is, without adding any chemicals, preservatives and any external heat.

What is the extraction method used at VVS?

VVS Classic Cold pressed oil is totally organic and free from chemicals. Thus, VVS classic chekku nallennai is unbleached, unrefined and cold-pressed which has a fresh aroma of sesame. Palm jaggery is added to reduce the bitterness of the sesame oil purposely during extraction of sesame oil from white or black sesame seeds.

Now the oil that is collected is filtered using natural filtration processes. The extracted oil is preserved of its original nutrients because no heat is used during the extraction process. Since sesame oil contains antioxidants it doesn’t need any preservatives.

Contrarily, any other vegetable oil extraction has the process of refining. This is washing of oil with water, salts and acids. Then bleach the oil to get the transparent-ish colour that can be seen in the bottles. There is also a hydrogenation process that is carried out using a catalyst such as Nickel or other heavy metals.

Hydrogenated vegetable oils offer manufacturing benefits, but also contain the infamous trans fatty acids. Trans fats are non-essential and the United States Department of Agriculture recommends avoiding them as much as possible by limiting your intake of hydrogenated oils.

Why does is it matter if cooking oil is cold pressed?

The Chekku oil extraction process is important. Thus if it is cold-pressed chekku nallennai, it makes sense that, our ancestors referred to sesame oil, as the most natural and healthiest of oils in India. Hence, the local name for sesame oil is நல்லண்ணெய் which literally means good oil. This makes VVS cold-pressed sesame oil the best for cooking and dietary purpose. It is the healthiest cooking oil.